Below is a piece published shortly after George Belmore died, as a tribute to him:

As our readers are already aware, Mr. George Benjamin Garstin, professionally known as George Belmore (formally we believe, for a brief period, before the playgoing public as Mr. Garstone Belmore), died, in New York, after a short illness, on Monday week. It is almost unnecessary to say to readers of this journal that he was a famous actor of what are known as character-parts and exceedingly popular in private life.

The earliest portion of his career was spent, about the year 1849, in Devonshire, upon what was called “Palmer’s Circuit.” He played then “utility” parts—a phrase which means everything anything. Palmer managed what in theatrical parlance is called a fit-up. Rough and various must have been the theatrical experience of George Belmore at that period. The present writer recollects him when he was principal low comedian in a company which, under Mr. J. W. Benson—a connection of the Beverly family—used to work the South Shields, Durham, and Stockton circuit.

He was a great favourite, as much for his careful impersonations, many of which evinced original talent of a rare kind, as for his really artistic buffo-singing. The admirable way he used to make-up for and realise the elaborate medley songs at that time identified with the name of Sam Cowell is remembered with keen pleasure to this day. “His first recognised appearance as a comedian (to quote from a contemporary) was made at the Marylebone Theatre on Boxing Night, 1856, when he appeared as Boke’s in Mr. Shirley Brooks’s drama of The Creole; or, Love’s Fetters. Mr. S. Emery was at this time the manager.

In the following January an impressive three-act drama was here brought out, called Ruth Oakley, in which Mr. Belmore represented the leader of a strolling company with marked success. The first character which exhibited  the higher gifts he possessed was that of Softy, in Mr. Cheltnam’s version of Aurora Floyd, produced at the Princess’s Theatre, March 11, 1863; and so remarkable was this delineation that the most sanguine predictions were made of his future career.

After appearing at Drury-Lane Theatre in a number of strongly-contrasted characters, which he sustained with equal ability, Mr. Belmore was specially engaged to open the Holborn Theatre in October, 1866, as the old Jockey, Nat Gosling, in Mr. Boucicault’s drama of Flying Scud, which, it will be remembered, ultimately obtained a run of more than 200 nights. When the old man threw off his coat in the Derby scene, and donned  the yellow jacket to win the race imperilled by the hocussing of the young jockey, the thrill of excitement running through the house was due quite as much to the skill of the actor as the force of the situation.

The last character Mr. Belmore played in this country was Newman Noggs, in Nicholas Nickleby, at the Adelphi, which he acted till the end of July, when he left for America. The greatest sympathy is everywhere expressed for his widow and children, in whose behalf, we are glad to hear, an entertainment will shortly be given at the Adelphi Theatre, which house has been placed at the disposal of the relief committee by Mr. J. B. Chatterton.” 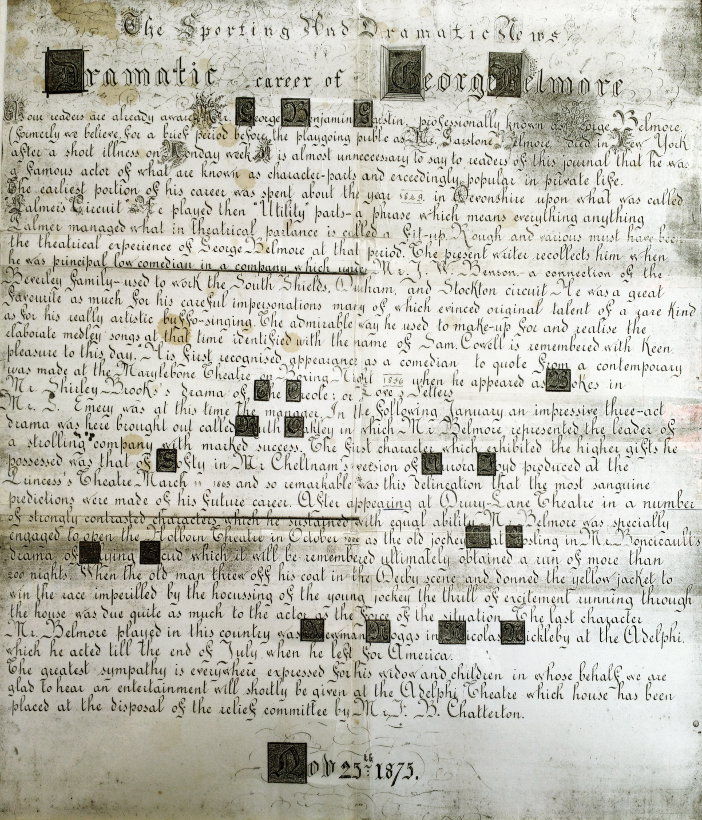 The widowed Alice wrote the letter below to her children about her husband’s ancestry and connection to the British Royal Family. The details it contains are unfortunately not backed-up by recorded facts, although this story hasn’t been confirmed as false either.

The Origin of the ‘Garstin’ Family

King George the 2nd had a Son, Frederick Prince of Wales. This son of his father has so serious a misunderstanding that he was banished from Court, & went to reside in Dublin, ultimately (still in disgrace) he inhabited Saville House Palace Leicester Square where he died. While in London he became enamoured of a young Lady of the name of Gascogne or Gascoyne who became his mistress, the law prohibiting Royalty from marriage save with Royalty. By this Miss Gascoyne he Frederick Prince of Wales had a Son, this Son, who for obvious reasons altered his name from Gascoyne to Garstin, was taken into the service of the Court during the subsequent reign, & held the post of Page or Usher of the Back Stairs (the same office held by Lord Adolphus Fitzclarence the illegitimate Son of William the 4th) and he was one of the party in the Embassy sent to Germany to bring over the Princess Charlotte the wife of George the Third. This man, the son of Prince Frederick of Wales married & had two Sons. One, the elder being our Grandfather, with a little money settled in London & married a Miss Rebecca Medder & ultimately by speculation on the Stock Exchange massed a large fortune. The other son was provided for by a Commission in the East India CUT service.