Lillian Belmore Garstin was the sixth  child of the great 19th century actor George Benjamin Garstin, stage name George Belmore, and his wife from a family of circus performers and proprietors Alice Maude Mary Ann Cooke. She was preceded by three brothers and two sisters, the first of which, George Belmore, was born 9 years before in 1863. In June 1875, they were joined by a younger brother who would be the final child.

In 1875, Lillian’s father died of illness at just 45 years of age while in the United States. However, with Lillian and her siblings all still young, and in some cases at various stages of school education, they and their mother Alice were all in London when this occurred, and unable to attend their father’s funeral in New York. Instead a ‘performance and testimonial benefit’ was arranged in London, attended, organised and contributed to by many famous actors and people involved in theatre who knew and worked with George Benjamin Belmore. 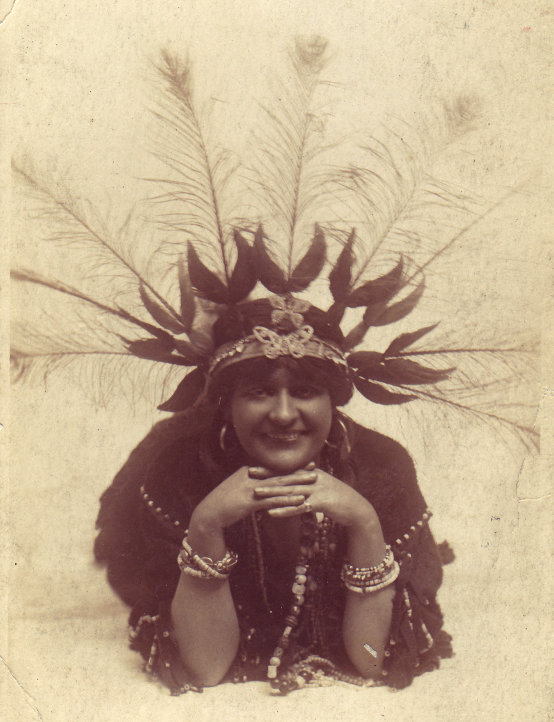 In 1884, at age 12, Lillian made her first appearance on stage in a small part in ‘Claudian’ with the Wilson Barrett theatre company, at the Princess’ and Olympic theatres in London. Story by Henry Herman. This was with several members of her immediate family in the cast. William Lionel Belmore, an older brother. Alice Belmore, an older sister, Alice Cooke, Lillian’s mother, and also Henry Cooper-Cliffe, who wasn’t part of the family at the time but later married Alice Belmore. 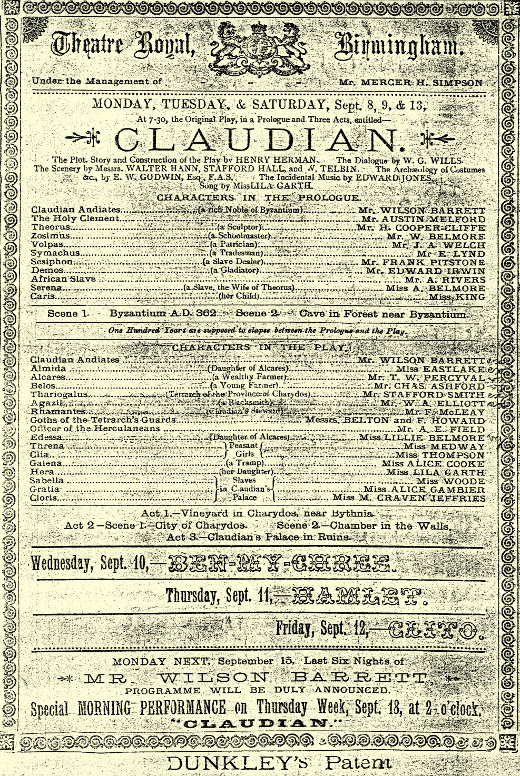 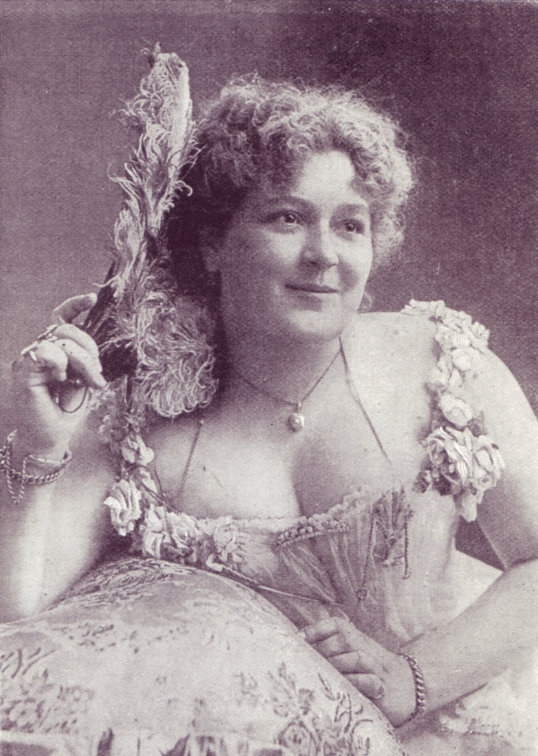 In 1889, Lillie travelled across the Atlantic ocean with the Wilson Barrett company of actors from Liverpool to New York. This was on a ship called ‘City of New York’. Their tour of the USA took them to Boston for three weeks. 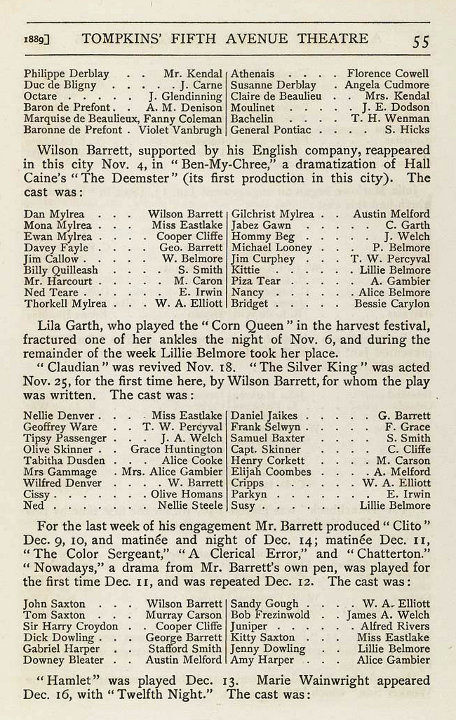 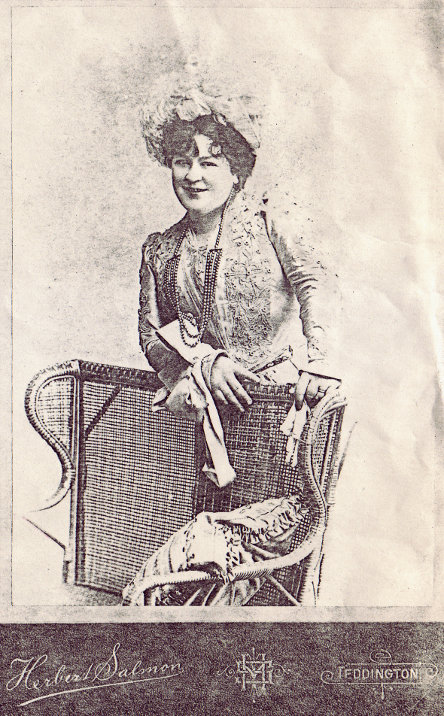 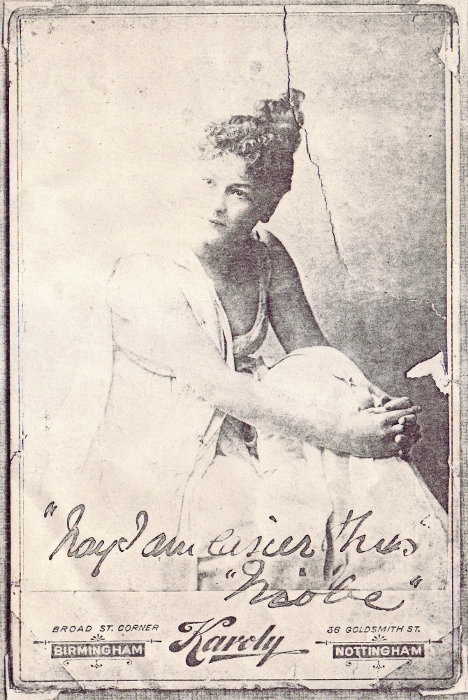 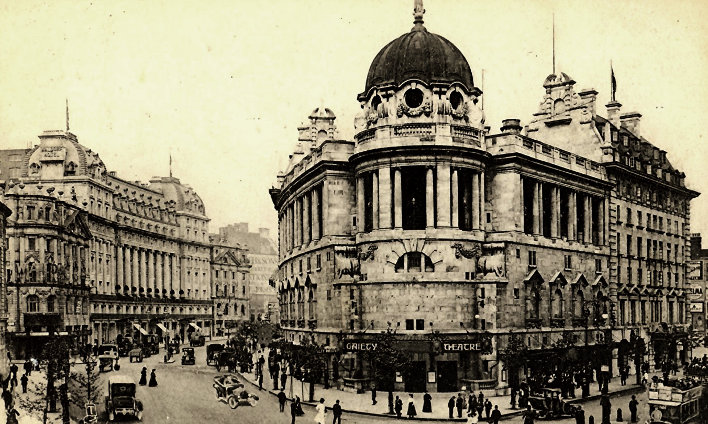 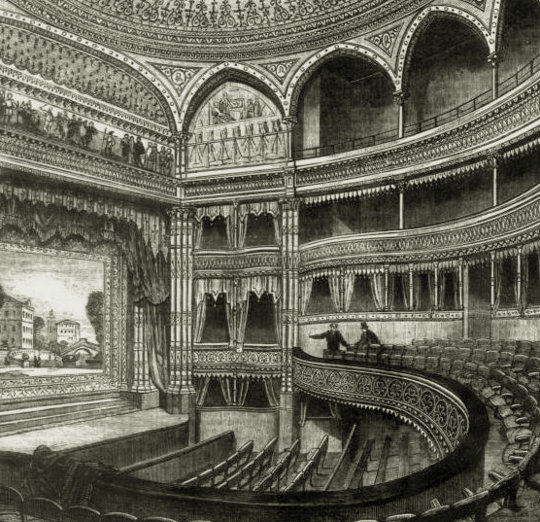 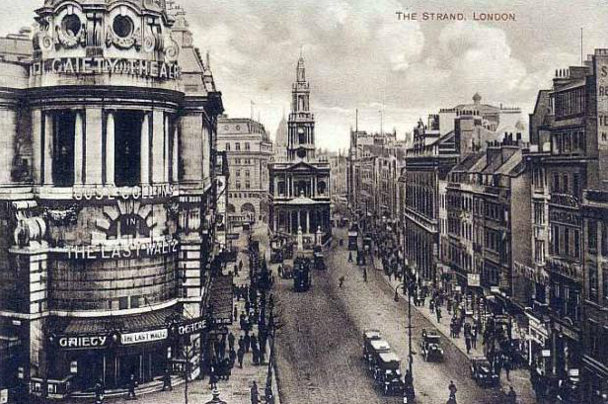 Mr. George Edwardes, proprietor of theatre groups and manager of Gaiety Theatre, saw Lillie Belmore and arranged for her to be in his acting companies. The Gaiety Theatre was traditionally known for burlesque farces, but was about to try hosting more story-driven comedy dramas. 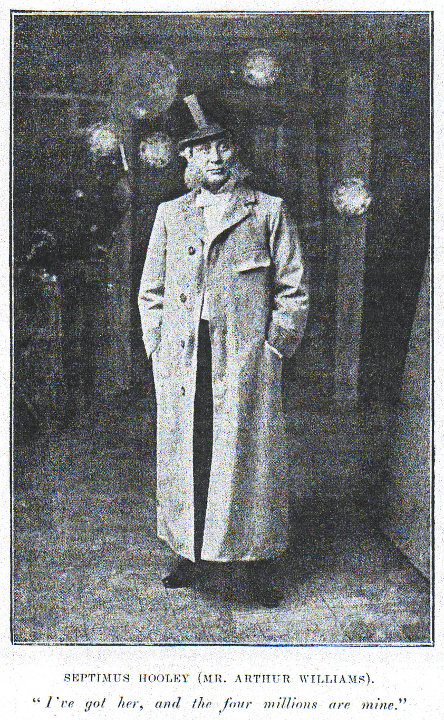 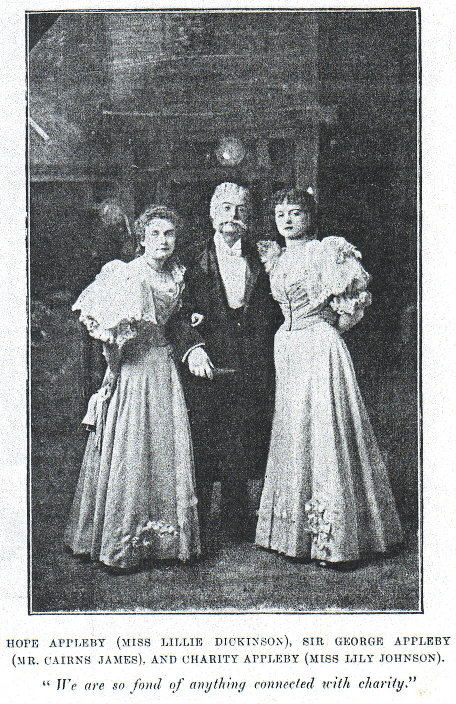 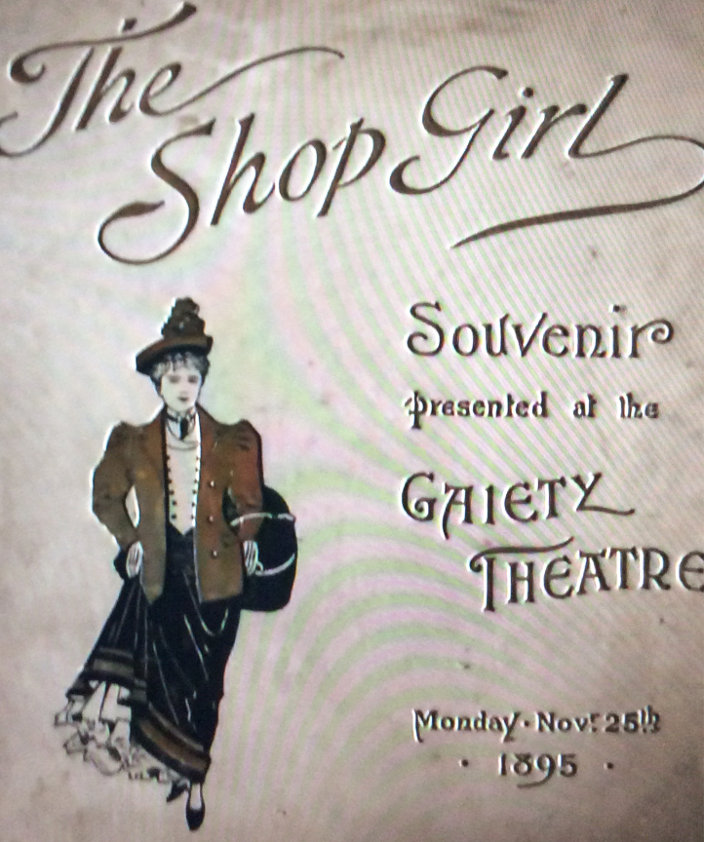 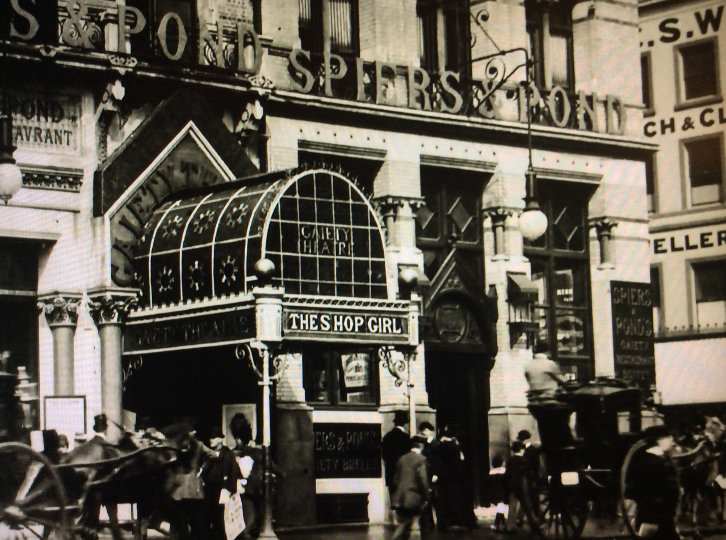 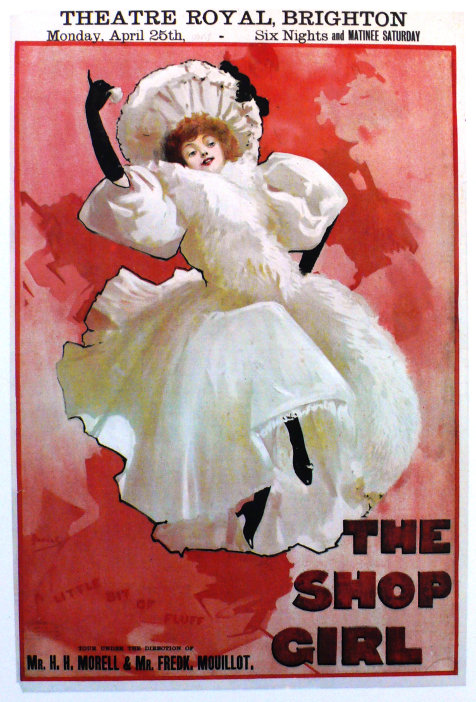 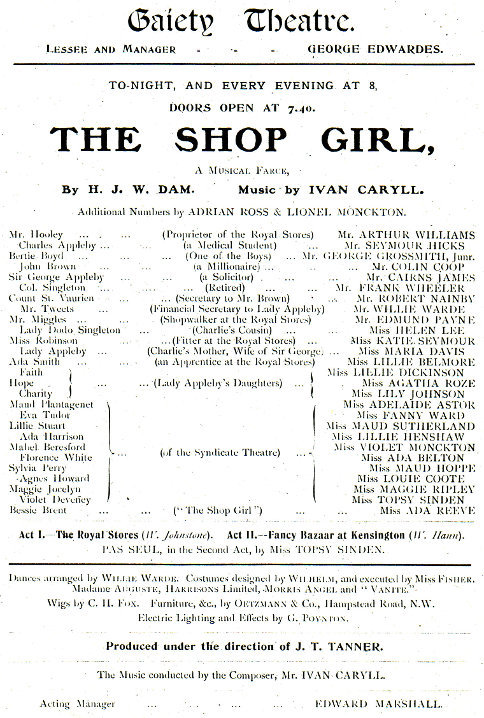 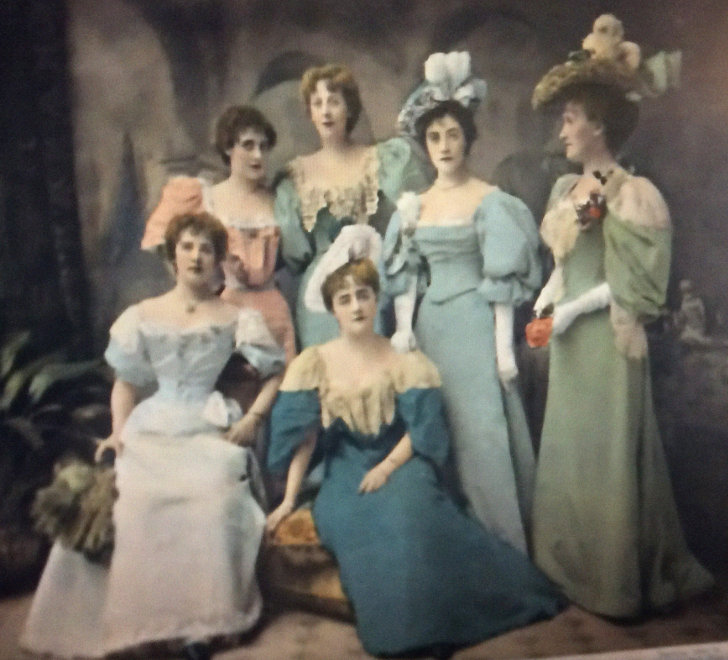 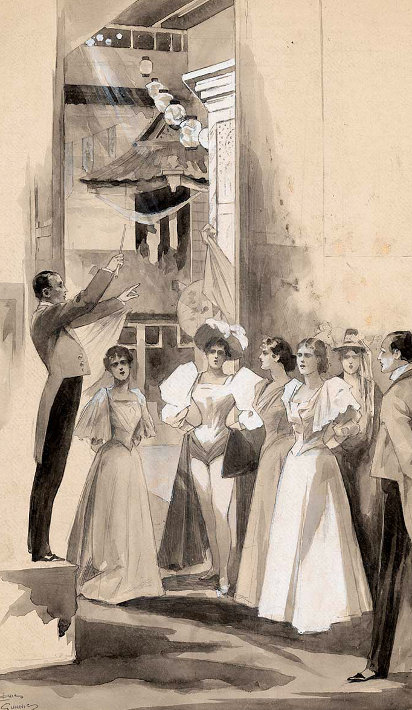 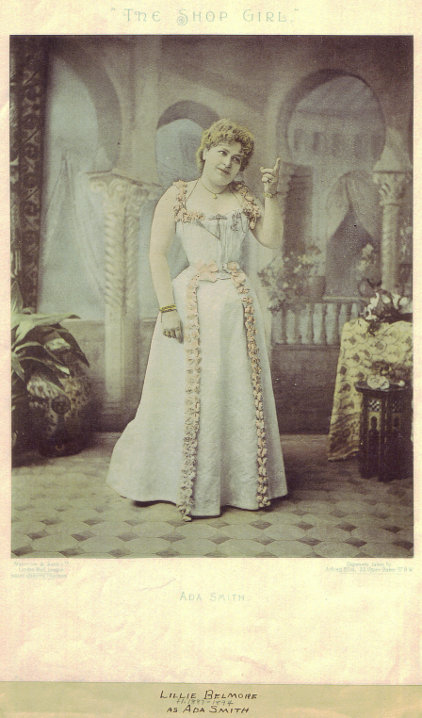 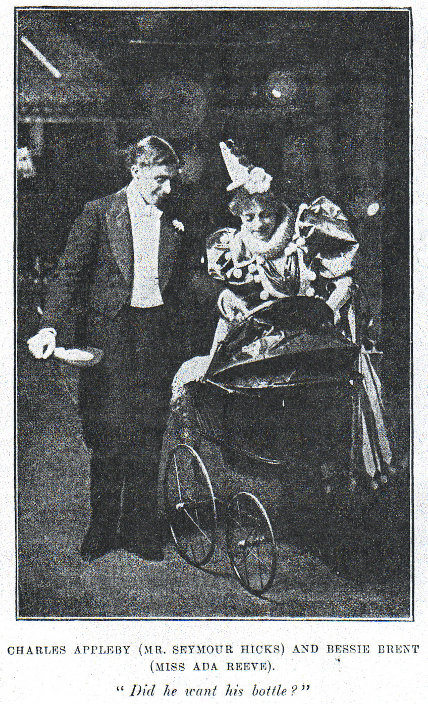 1897, Lillie sailed to South Africa with the touring George Edwardes company, and returned via the West Indies, arriving in Southampton, England.  The ship on the return journey was called The Atrato, and was a Royal Mail package transport ship. She was with her brother Herbert Belmore, and her husband Charles Claude William Wallace. 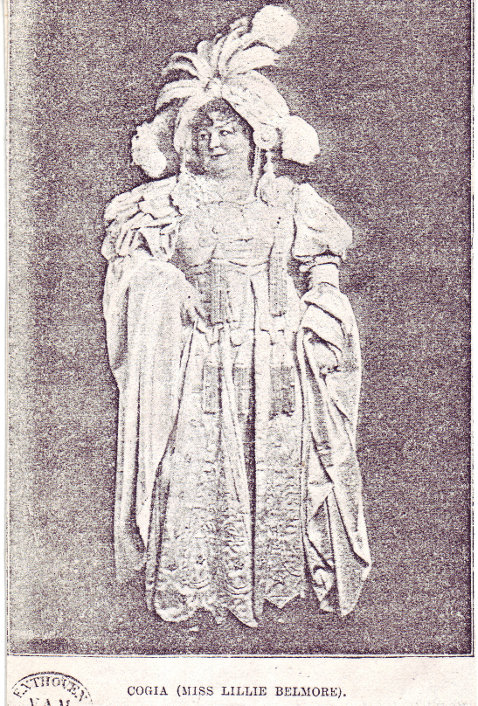 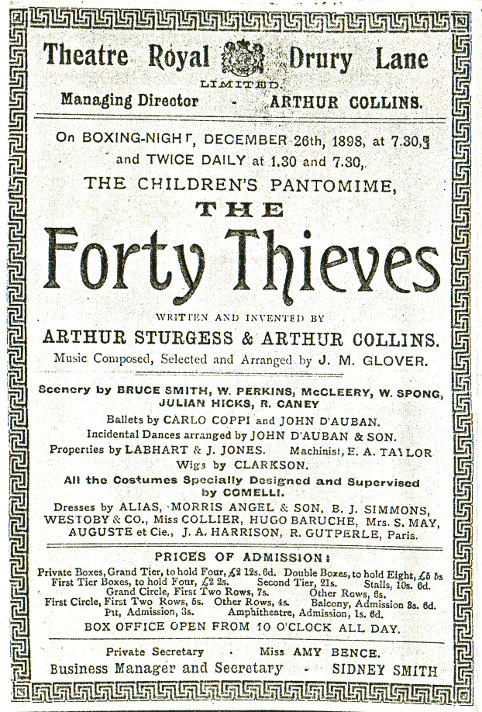 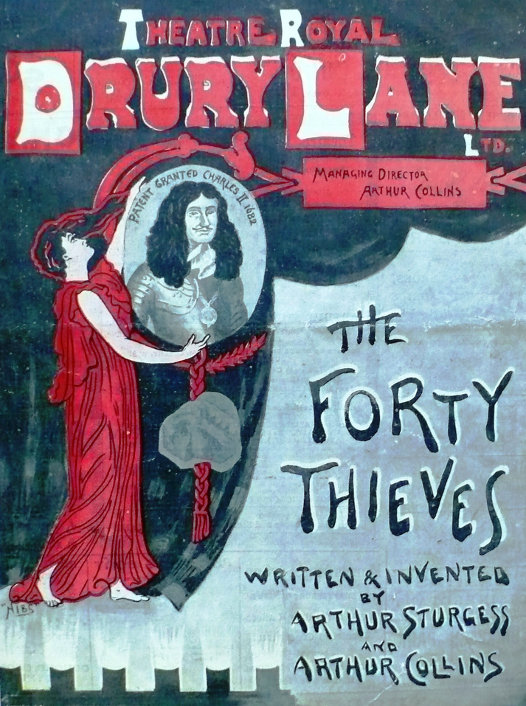 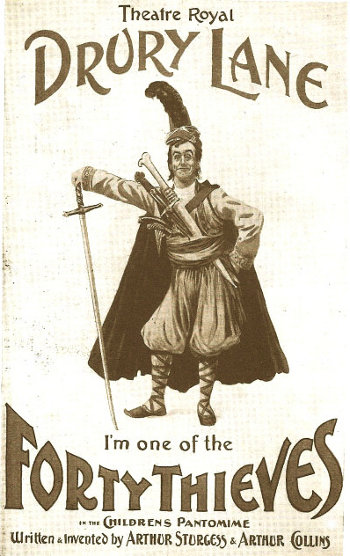 Lillian Garstin Belmore died in 1901, on the 17th of January, at just 29 years of age. Heart disease was the cause. Shortly before this, she was engaged to play the part of Arethusa in Cinderella at the Prince of Wales theatre in Birmingham, but due to illness she had to withdraw from doing so after a few performances, even though she had brought success to the play. Although still young, Lillie had achieved a 17 years long theatrical career. 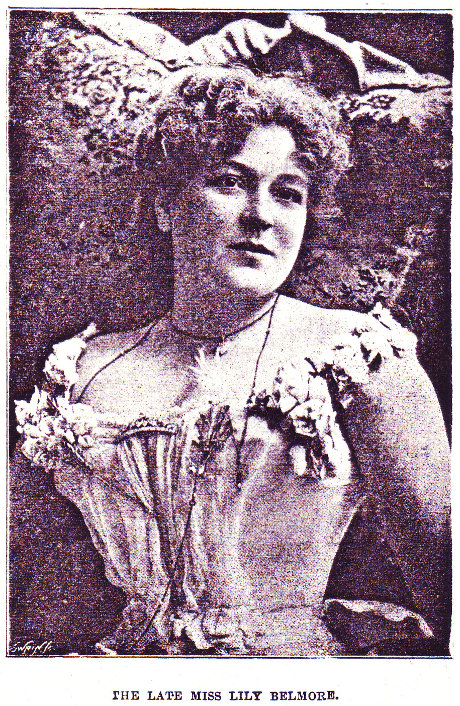 In the Harborne Parish Churchyard the remains of Miss Lillie Belmore were laid to rest, named as Lillie Wallace. The funeral procession started at the Hen and Chickens Hotel in Birmingham, where Lillie had been staying. One striking emblem among the floral tributes, of which there were about fifty, had an inscription made from violets that said ‘To Niobe’, in reference to Lillie’s role in the 1892-1894 play of the same name.

Not much is known about Lillie’s family life beyond the Belmores. It doesn’t appear as though she had children, and the date of her marriage to Charles Claude William Wallace is not known. She did sign her name as Mrs. Charles Wallace sometime near 1890. 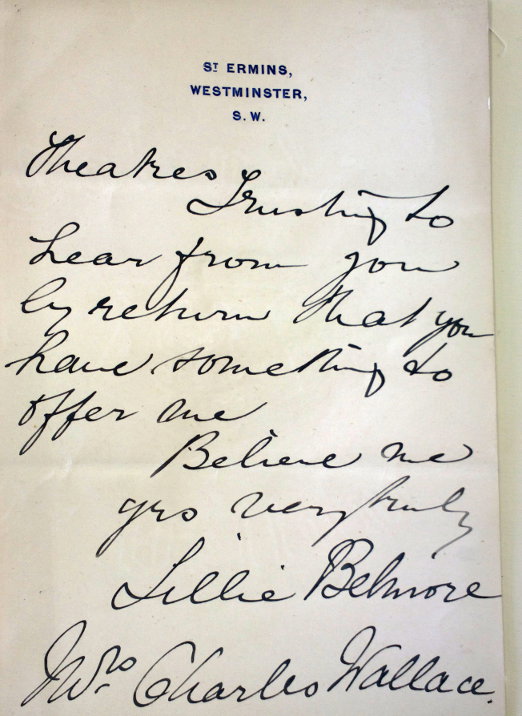 In 1950, in the United States, her brother Herbert Belmore and his successful actress wife Bertha adopted Clifford Wallace. Clifford was said by Bertha to a newspaper to be the son of Herbert’s niece Doris Wallace, who died in an elevator accident, which would make Doris a daughter of Lillie.  Yet the Wallace name came from Clifford Wallace’s father, who abandoned Doris and Clifford. A possibility is that Clifford was descended from someone else in Charles Claude William Wallace’s family, possibly one of his brothers, and the relationship was simplified when it went to print.  While Bertha and Herbert cared a great deal for young Clifford Wallace, it doesn’t appear as though the Belmore and Wallace families had much to do with each other beyond their connection with Lillian. Sadly Herbert and Bertha Belmore died in 1952 and 1953 respectively, so their time with Clifford wasn’t long either.